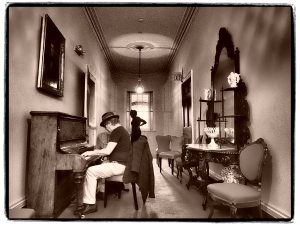 Artist Statement:
I have been the official photographer for the Tennessee Williams Festival in New Orleans for ten years now, starting immediately after Hurricane Katrina. While I shot the entire festival, it meant mostly shooting parties, events, panels, sponsor pics, and celebrity authors; more straightforward than artistic, though I did my best to invoke composition and artistic flair. Then one night, a few years back, my last assignment for a Friday evening, I walked into the Hotel Monteleone Ballroom with my camera, there to shoot what I thought would be a typical performance, and preemptively planning that I would walk out after fifteen minutes so I could saunter home and finally sleep.

That (now path-changing) show was David Kaplan’s production of his and Alison Fraser’s “Only a Paper Moon: A Tennessee Williams’ Songbook.”

The piano player was virtuoso, Alison’s voice and performance evoked tender magic; but David’s direction and visual composition of the players, lights, and stage was what cinched it for me, the hotness of that show wrapped a velvet belt around me so I couldn’t leave. I snapped away in the dim, red light – and stayed. And returned – on my own, without assignment – for the next night’s show, with even more of my low-light lenses.

It was then, I was in love with David Kaplan’s visual genius for the stage: composing his actors and their environment as a painter does — and birthing from the static, artificial ink written on paper (sometimes scribbled decades ago like an oak seed in waiting for David’s water) — the intrinsic, indispensable nature of real human lives and stories. Not artifice, not falsity, but human truth. The human condition. Life’s essential oil.

His actors do not feel like actors, reciters, players speaking lines and hitting marks – so controlled that when you look in their eyes you see wheels turning like a mimeographic machine instead of a person. His actors become people. Sounds easy, sounds like the typical job description of an actor – but so many times actors never become people. They just act, a high-end charade. Then, I have a feeling as an audience member, a bad or even average actor is lying, not telling the truth…the truth of the human soul. It’s missing. As Tennessee Williams himself put it, I see the “mendacity.” While it’s entertaining, I intimately want what is buried inside — crying humans — not ink on paper — to surface, breathing: their personal horror, the joy, depression, fear, aggression, their spiritual unknown – the string of wounds we endure until there can no longer be healing, but only sutures and catharsis.

David’s direction of Tennessee Williams’ plays become virtuoso documentary of life stricken, and when not, they are the most elegant metaphor. David’s actors so much become true they could be used as case studies for whatever ailments physical and psychological that afflict their characters. And I have seen the same actors under David’s direction, and under another’s. By another, I felt the artifice of the stage, the struggle of the actor just to turn the craft’s mimeograph gears — the lie. It is that difference, that artistry, that multi-leveled genius, that draws me again and again to photograph David Kaplan’s works.

All acting is lying. But’s David’s lies are truth. His truth, is the human condition.

That condition, in my photos, is the human heart that started off as a bud, and eventually morphed into the shadows of a trampled blossom — petals scattered across the ground for the ants to pick up and carry away to their dust bowl.

None of my images are standard photos you’d see in Playbill. I don’t do ads. I capture art with art. Many of my photos are not just on-stage; but back-stage, off-stage, in a hallway, on a staircase — while actors are still in costume and character, but are on their downtime, or waiting to go on, or still rehearsing. Even when the play has paused, I capture the life of the character that goes on between scenes. Moments that have no large audience, but only my hunting eyes and my one lens. Because how a person truly lives, is often those secrets between the public scenes of their lives. I like secrets. Secrets are like a doctor peering into a patient’s body.

I choose to use a .95 aperture vintage lens. This is the same aperture Stanley Kubrick used in his film “Barry Lyndon” and NASA used in space. Because it can see more than the human eye. In the dark, it becomes an X-Ray.

I have taken away color. Maybe left one or two. To explain a sort of active decay. While we are living, we decay. Our hopes decay. Our love decays. Our veneers decay. From that, life grows. I leave what is essential. The rest is ephemeral.

His mother is famous award-winning potter and ceramist Dora Tse-Pé, a Tewa Native American born on the Zia Pueblo in 1939, who has developed her art on the San Ildefonso Pueblo, where most of his family lives, also well-known pottery artists.

He is of French and Native American descent, often called Métis.

Before he could drive a car, he drove motorcycles.

Ride started as a painter, but has an extensive visual art background in all fields, as well as writing and music. As a painter, he never thought he’d become a photographer; feeling studio, still life, and even posed “art” photographs were too stagnant, sometimes trite, often meaningless.

During Hurricane Katrina, Ride voluntarily stayed behind in his New Orleans home, and only hours after the storm, started collecting food, water, and first aid medical supplies while many others were looting electronics and expensive merchandise. He decided to participate, not just watch. That night, with no electricity and by candlelight, he became a first aid medic to the hurt and handed out free survival supplies and food, and did so for months in the aftermath of the hurricane that destroyed his hometown.

It was then that Ride picked up his camera, and working side-by-side with journalists from around the world from the likes of Time, Newsweek, and Getty, re-learned that most importantly photographs capture the human condition. Ride, also a playwright, believes that the best of plays also tell precisely the human condition. It was then, shooting for the Tennessee Williams Festival, watching daily these performances of vast tomes of human emotion and often magnificent tragedy, that Ride decided to combine the two. While traditional theatre photography focuses on the wide stage for mass promotion, Ride wants to capture in closeup the inner life of people inside a personal story.

Uniquely, Ride’s French Quarter art studio is only feet away from Tennessee Williams’ last home. In his memoirs, Tennessee wrote, “I hope to die in my sleep…in this beautiful big brass bed in my New Orleans apartment, the bed that is associated with so much love…” Ride, too, spent many nights in that same bedroom of Tennessee Williams, thirty years later — and has walked many of the steps that Tennessee once walked throughout New Orleans.

500 days after the storm, 80 of Ride’s photographs from Hurricane Katrina were on display at Texas Lutheran University, for their largest audience turnout, where Ride also spoke before several thousand students and faculty. He currently has an exhibit in New Orleans at the Gallier House Museum of the homes where Tennessee Williams once lived. He also shoots for the Ogden Museum of Southern Art. In art school, he won 5 first place awards in one year. Ride has photographed celebrities such as B.B. King, Brian Wilson of the Beach Boys, KISS, Blondie, Jessica Lange, John Waters, and Edward Albee. Ride has trained under and learned working side-by-side with many schools, courses, and teachers, including the U.S. Navy Photography School, Thomas Neff the Professor of Art at Louisiana State University, Cédric Faimali of the French Collectif Argos, Stanley Greene of Magnum who snapped a celebrated image of the fall of the Berlin Wall, and Mannie Garcia who took the famously iconic photograph of future President Obama, used for his HOPE campaign. Ride’s documentary and theatre photographs have appeared in many print and online publications, newspapers, and books from American Theatre, USA Today, Consumer Reports, National Geographic, to 8 photographs in David Kaplan’s newest book “TENN YEARS: Tennessee Williams on Stage.”